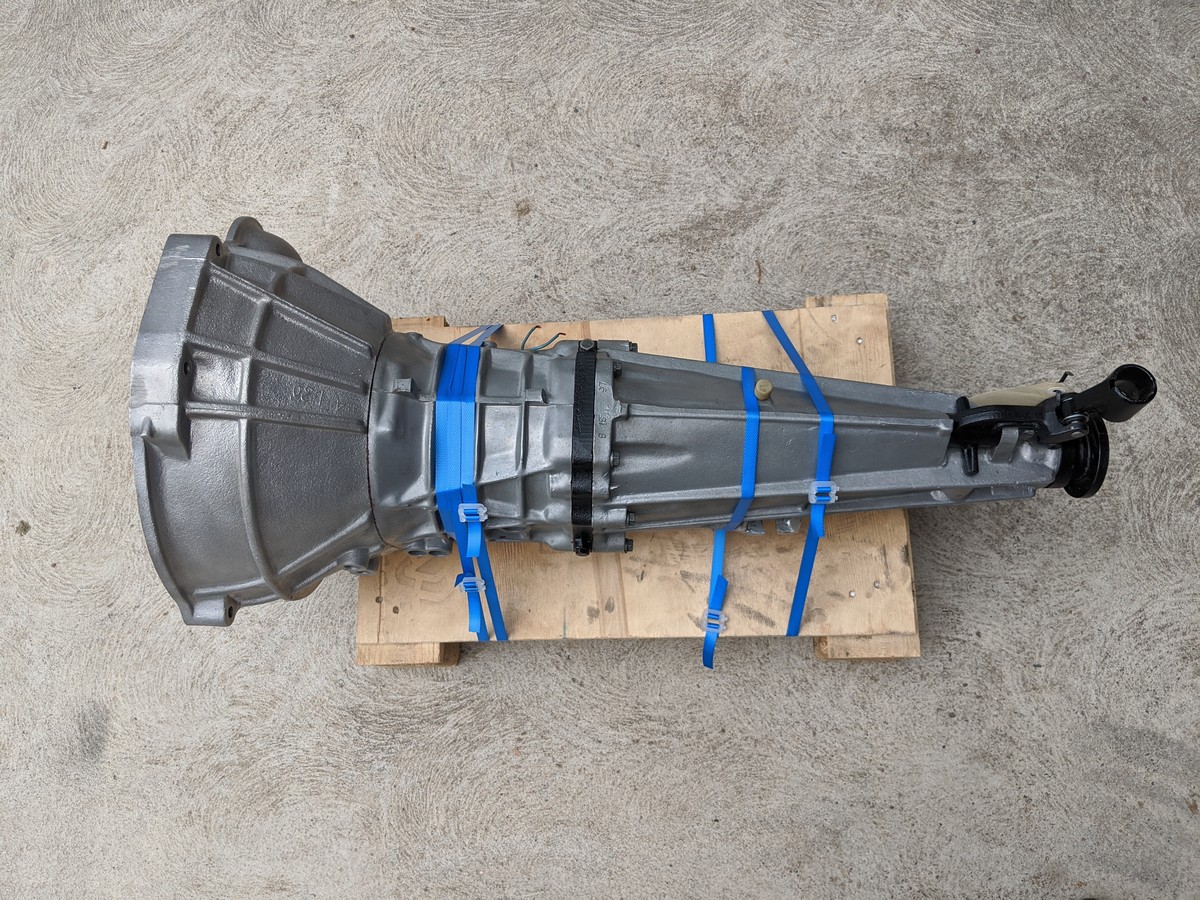 There are some parts that you just know are abundant but you struggle to find anyway. The transmission crossmember for an early gearbox had eluded me for months and months as I persisted in limiting my search to Australia only. I relented and after posting on Instagram one was on its way from the US in less than a day.

In early December I decided to free up some floor space and take the engine in to Stewart Wilkins Motorsport. He has already reconditioned my differential and transmission and I trust his many years of working on these cars will result in a well rebuilt standard engine that should outlast me.

I spoke with him in March and he was optimistic the engine would be ready soon but with the Coronavirus halting a lot of trades it will no doubt be delayed.

…and the early 5 speed FS5C71-A transmission he had rebuilt for me. I never tire of seeing shiny restored parts.

In August 2015 I cracked open the brake calipers and this summer fitted them to the car. Not the fastest restoration job I might add. I’ve got a lot of photos of the caliper restoration so I might post them separetely. In the meantime, here are the highlights.

I managed to pick one of the hotest days this summer to start installing the trim but when you’ve got a young family and some garage time is booked in you have to run with it. Thankfully I had some help from a friend and between the two of us we achieved some good results. I’m a bit scared to tackle the headliner but with some extra hands even that job will be ticked off.

I’ve tried real hard to keep every part an original one on this car but with the diff I had to compromise somewhat. My car originally had the diff in the forward position. This meant the half shafts were at an angle to the wheels which placed undue pressure on the uni-joints. Nissan very quickly corrected this design flaw by moving the differential back. As a result the prop shaft had to be extended and the transverse link replaced with a curved one to allow access to the drain and fill plugs.

One night while rummaging through my endless boxes of parts I found a distributor! It seems like I’ve had to buy a lot of replacement parts for this project so it’s a nice win when all I have to do is restore it instead. I toyed with the idea of a 123 Ignition distributor but in the end the ‘original’ mantra won out. Performance Ignition down in VIC turned this around in under a week and they did an excellent job to boot.

All up a pretty busy and productive summer for me. I’m starting to look back and see more jobs done than not but it still feels like there’s a thousand little details that require hours upon hours of work. A lot of is down to my OCD but I don’t see that as a bad thing. It’s work I enjoy…

In other news, I got t-boned at the start of summer and spent a good week annoying my wife with what I should buy next. I really wanted a fun hot hatch but ended up with a bland not-even-warm 2013 Hyundai i30. It was the sensible purchase so not a terrible result.